On July 18th all around the world, communities participated in Mandela Day–Nelson Mandela’s legacy for positive social change. Mandela Day was established after Nelson Mandela’s 90th birthday to inspire individuals to take action to help change the world for the better. As the founder of Play Rugby USA, my vision is to create a “Better World through Rugby” by developing and empowering young people to achieve long term wellness and success.

As part of Mandela Day, we brought our Senior Academy students from all 5 boroughs of NYC to our Junior Sports Leadership Academy summer camp for an afternoon of fun, learning, and service. Below are a few photos with some inspirational quotes from Mr. Mandela – I hope you enjoy! If you like these and want to see a few more, check out Play Rugby USA’s Facebook and Flickr Pages.

Everyone has something positive they can give. If we all gave something every day, imagine what a difference we could make. 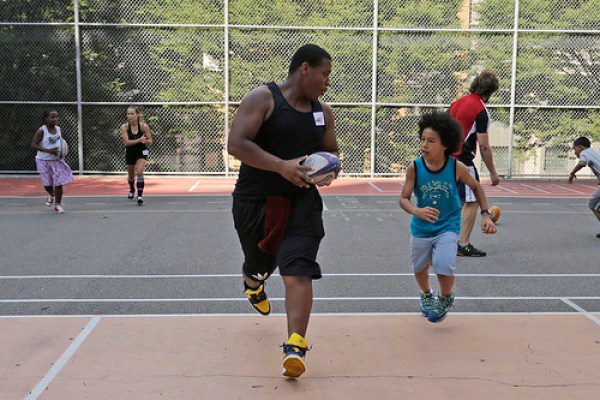 Leading the way and passing on responsibility.

“There can be no keener revelation of a society’s soul than the way in which it treats its children.” 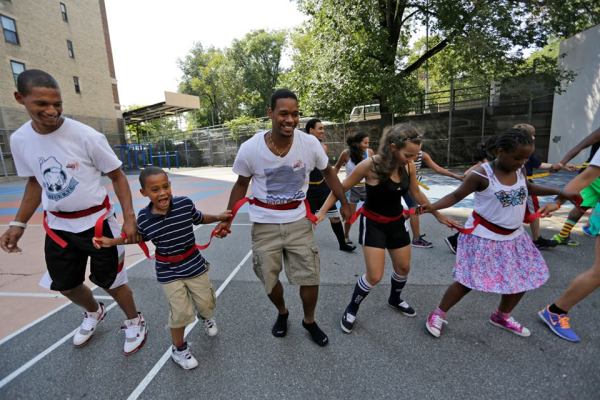 “It always seems impossible until its done.” 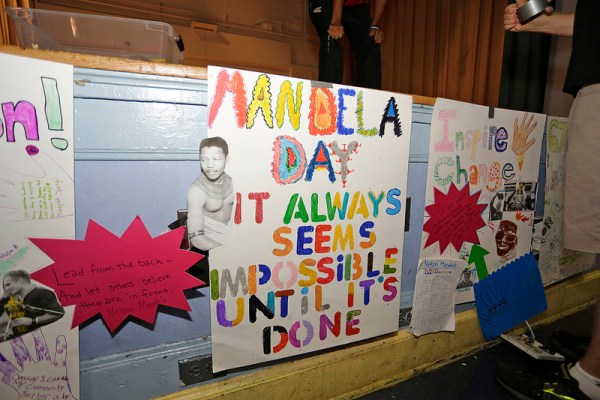 It’s only impossible until it gets done!

“Education is the most powerful weapon which you can use to change the world.” 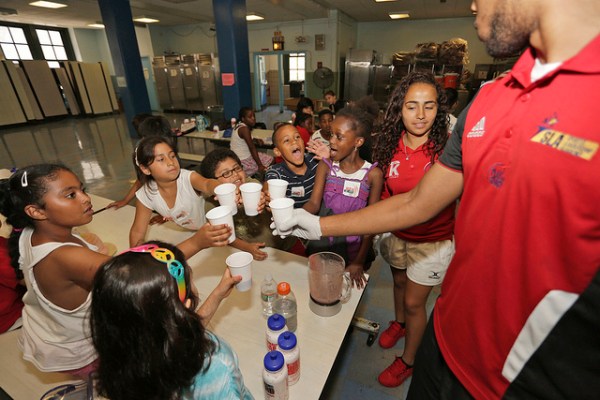 “For to be free is not merely to cast off one’s chains, but to live in a way that respects and enhances the freedom of others.” 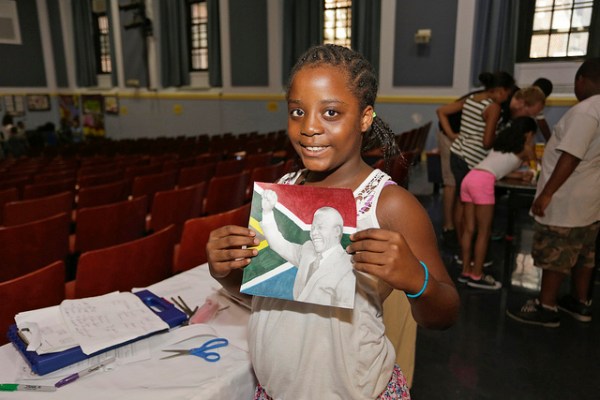 The kids learned about Mandela’s philosophy for social justice

“Sport has the power to change the world. It has the power to unite people in a way that little else does. It speaks to youth in a language they understand. Sport can create hope where once there was only despair.” 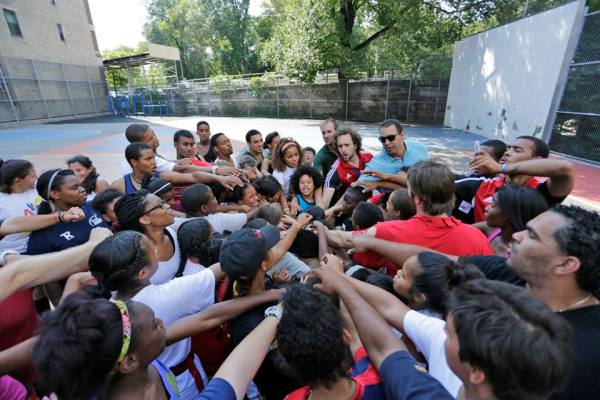 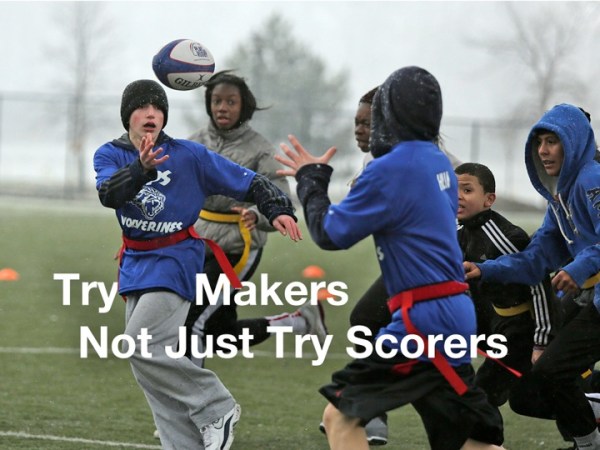 As in most team sports, in Rugby, a team wins by scoring more points than the opposition. The primary way to score points is by advancing the ball over the opposition goal line and touching it down on the field (pitch) ground; this is called a “Try”. What we’re going to do is look at how a team scores a try through working together, something vital for a try to be successful. My intent is for us to take this idea of teamwork off the pitch and into your office and your life. As will be evident in the following YouTube clip, in almost every instance when a try is scored, it’s really about “Try Makers, not just Try Scorers.”

In basketball, hockey, and lacrosse, you can read up on stats for an “assist;” credit going to the one person responsible for passing the ball to the scorer. It’s a sports statistic for a reason—because it matters. In rugby however, this statistic doesn’t even exist. How is that possible? Because most tries are created by multiple assists, sometimes a continuous series of assists that can go on for a several-minute period before the try is eventually scored.

I want you to watch a quick version of this happening—the YouTube link below happens to be a clip of one of the greatest tries ever scored in an International rugby match. Added bonus—it was scored by the USA in the 2007 Rugby World Cup. Double bonus—you’ll find it entertaining whether you completely understand Rugby or not (I hope)! After you watch it, I’ll walk you through each of the key players involved and how it is a perfect example of “Try Makers, not just Try Scorers.” http://www.youtube.com/watch?v=r1g6Oeyx1Q8

Try Scorer: Okay, credit where credit is due, Takudzwa (Zee) Ngwenya, the Try Scorer, finished off the play with exceptional skills, footwork, and pace. (He actually ended up landing a contract in Europe off the back of his efforts and still plays professionally in France). Pure talent for sure, but let’s back up a bit and walk through the Try Makers involved—all of whom I had the genuine honor of playing alongside during my international career with the USA between 2003-2005…back when I was younger and fitter, of course!

Leader # 1: Todd Clever, appropriately enough, the current USA National Team Captain,  intercepts the ball against the odds on USA’s own goal line and aggressively advances the ball forward. He exhibits confidence and commitment to his decision. When faced with a barrier ahead, he assesses his options & forces it out of the way. However, he knows he can’t make it all the way on his own, so immediately looks for a teammate to take the ball forward from here, and assist’s the ball off to Alec Parker. Off the field, Todd is the equivalent: An entrepreneur that seized an opportunity, created a movement, and made it happen.

Try Maker #2: Alec Parker, who managed to notch up over 50 appearances for the USA was dubbed by his former teammate and then coach, Tom Billups, in 2007 as “One Hard Man.” Having played with and against Alec, let’s just say, I concur! He was one of the best “Try Makers” out there—and scored a few along the way, too—by doing the hard work. In this video Alec worked hard to get there and support Todd, trusting Todd to make the right decision (to pass). Alec then advances the ball forward himself before providing the glue to success of the whole play. Rather than choosing to take unnecessary contact and make a few extra yards, Alec selflessly passes on the ball to ‘assist’ Mike Hercus to take it from here.

Try Maker #3: Mike Hercus was the USA’s primary play-maker in 2007. In the clip he takes the assist from Alex, continues to go forward, but using his lightening quick reactions and peripheral vision, identifies an opportunity out wide. He immediately makes a long, well-executed lateral pass to assist (the 3rd assist so far in this Try in case you lost count) his teammate, and Try-Scorer, Zee. Zee works his magic and the rest, as they say, is history.

So, while Zee exhibited incredible skills, this try would not have been made possible without each of the player’s contributions to the try. This was a break-away try after a turnover, but many tries are the result of the entire team grafting and pulling together over a longer series of play.

In rugby, there is a role and a need for everyone; the best international team in the world, the New Zealand All Blacks, summarize this as “the team towers above the individual.” What other sports have a foundation as such?

So, what are the learning points from this off the field in order to achieve success as Try Makers, not just Try Scorers?

1) To be successful you need both leaders and supporters.

2) For an opportunity to be “game-changing,” leaders may have to react quickly, take initiative, and drive it forward, against the odds.

3) When the odds are stacked against you, you can’t, and thankfully don’t have to, make it alone.

4) Teamwork and support is vital to be successful, so you need an effectively balanced team.

5) The best teams put “Team First, Self Last.” Personal sacrifice if necessary to benefit the team.

6) The best teams trust each other and work hard together.

7) From trust and hard work comes camaraderie and success.

Look forward to your thoughts, and of course, please follow my blog if you enjoy the content you’re reading! My next Values in Action piece will explore the idea of “Play What you See.”

Rugby is the only sport in the world where you have to advance the ball to the other end of the field in order to score, but you’re NOT allowed to pass the ball forward. Therefore, the only way to get the ball there is to go forward yourself: run forward, attack the opposition, create space, and gain territory while working with your supporting players to maintain possession of the ball. When coaching or watching young kids play rugby for the first time, “go forward” is something you’ll hear a lot!

In Rugby4Good terminology, Go Forward should also be relayed off the field. It is a great meta-theme for any Rugby4Good program or organization. Go Forward as we define it is to “Strive to improve, to experience growth, and to never give up“. This is a powerful message for a young person who may be facing adverse conditions on a regular basis. You (they) can’t control everything, but you can strive to be a better person, to make the most of your opportunities, to listen, to learn, and to develop. Combine this inquisitive desire for self improvement with a little grit and you have someone that is Going Forward!

Equally, Go Forward is a running theme in our social enterprise that can be applied to any business. We are continuously developing our curriculum, training programs, and overall program framework to intentionally maximize our youth development objectives. We work closely with our program partners to collaborate around achieving positive educational outcomes for our participants and on-going development opportunities for our respective staff. We regularly measure & evaluate our outcomes within a framework designed to achieve long-term social impact. In doing so, we face numerous challenges along the way around funding & budget cuts, space limitations, and policy changes, but we also identify and create opportunities determining ways to keep going forward.

Rugby4Good is about putting Values in Action – both on and off the field to create a culture of achievement. Here are seven ways to implement a Go Forward approach to your life or organization: